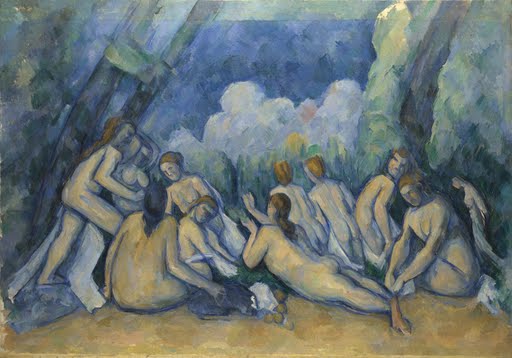 The Bathers by Paul Cézanne. This painting has been with me since the early 1970s, embedded in my soul The National Gallery in London purchased this in 1964 for £500,000. (Nearly £10m in 2018’s money). Which seems like a bargain! The National Gallery paid a quarter of the asking price for The Bathers by Paul Cézanne. The British Government and an anonymous donor made up the rest. The painting’s expense did cause some consternation with the public who might not have grasped its importance. One of three late paintings by the master, none remained in France, the other two are in the USA.

Cézanne for me, is one of the great masters of all time. A man utterly dedicated to his art. In his latter years, he spent many hours alone, virtually a recluse, totally absorbed by painting. Cézanne contracted pneumonia when caught out in the field during a storm, his time as a recluse was brought to an ignominious end. He died a few days afterwards. True dedication to his art surely?

He had the ability to break away from impressionism and to create something totally new and vibrant. Therefore, Cézanne is now widely recognised as being the father of modern art.

Whenever I am in London, I make the well-worn pilgrimage to see this work. To be fair, it dazzles me. This is one of those works that gets right into my soul. I marvel at the colours and the brush work employed. No wonder that Picasso said he was “the father of us all”. I always view the work with a smile on my face. I think about the sacrifices Cézanne. Not only personal privations, but emotional ones too. Sometimes, it takes a great deal of courage to be an artist.

The Bathers by Paul Cézanne – the work itself

Just what is it about this work that attracts? Partly for me, it is the fact that he was a late bloomer (comme moi). His first one-man show wasn’t until he was in his mid-fifties. Cézanne  had a disregard for artistic conventions and his artistic vision. In the Bathers, Cézanne encapsulates both.

One of the aspects that first hits you is the size of the work (approximately 130cm by 200cm) and the audacity of the subject matter. He presents us with one of the traditional artistic mores with the nude. But his execution is wildly different. His interpretation of nature and the body as part of nature almost jars our vision. There is a distinct distortion of the human form, especially in the central and lower left figures. It is as if he is showing us the creation of the bathers themselves. They seem to emerge from the earth. At one with nature and indeed part of it.

Picasso and Matisse amongst others were influenced by it. We can view Cézanne as a progenitor of the Cubist movement, which was to become spearheaded by both Picasso and Braque, and then joined by such luminaries as Robert Delaunay, Henri Le Fauconnier, and Fernand Léger.

Interestingly, the colours used by Cézanne are muted, almost pastel. We view the foreground which is earthy and sandy. Some of the background is veering towards the abstract, but we can make out trees and shrubbery. Besides that, the proportions Cézanne used are exaggerated and linear. The features of the bathers are indistinct, or simply views of the backs of their heads.

In closing then – at each visit I find something new. That’s another hallmark of great art. When visiting London, please find time to plonk this on your list of must sees. The painting will not fail to disappoint you.