My visit to the Van Gogh Museum in Amsterdam was long overdue. One of the items on my bouquet list, the dream came true in June 2018. This was a welcome change to my usual habit of exhibitions in the UK – Picasso 1932 for example.

First of all, my goal was simple. Two paintings had been singled out for specific viewing. The first was The Potato Eaters. The second work was Wheatfield with Crows or Crows in the Wheatfields. 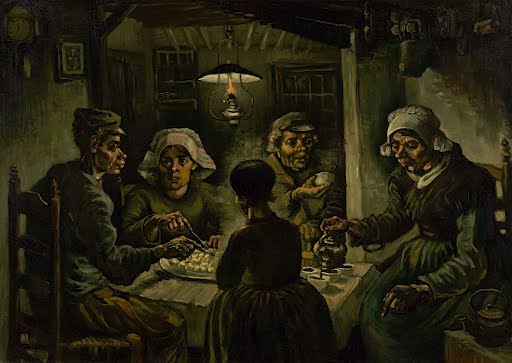 The first work had long held my fascination. It is dark and dingy. The faces and bodies are slightly distorted and rather grotesque. But they capture what Vincent wanted to capture. He captured their gnarled hands, the very hands that dug the potatoes out of the earth. It is the very essence of manual labour. Honest manual labour. The complete charm of this painting is that he conveys their roughness. The simple light under which they eat illuminates their toil for us. It isn’t a painting that is conventionally appealing. But it is more appealing because of that.

There was the obligatory gathering of visitors around the work. Luckily the crowds parted though, so I was lucky enough to get a few minutes glimpse on my own. This was the first work I can remember seeing by the artist, way back in the early 1970s. It does not disappoint. You can experience his genius by looking at this work. The work was the culmination of an ambition to emulate his hero Millet. The tone is dark and sombre. It has a dusty feel, not unlike a freshly picked potato. Probably, that must be the overall effect he was looking for. My appetite had been whetted.

There are around eighteen self-portraits in the Museum. Each one has a different characteristic. But in each one he looks very serious. They are reminiscent of Rembrandt and very self-analytical. Some contain a similar dark palette to the Potato Eaters.

Several examples possess a predominately blue background and are lighter in feel and tone. These surely represent a nod towards his later self portraits and his awareness of his own psychological makeup. Especially relevant though is that his moods are self-evident on the canvas. The later works exhibit an experimentation with pointillism. They are richer somehow, they portray his introspection more clearly. The spectre of death is evident, especially his depiction of his eyes. In some they appear like a shark’s eye – cold and dead.

The Yellow House or The Street is one of the most striking of Van Gogh’s works from his time spent in Arles in 1888 to 1889. 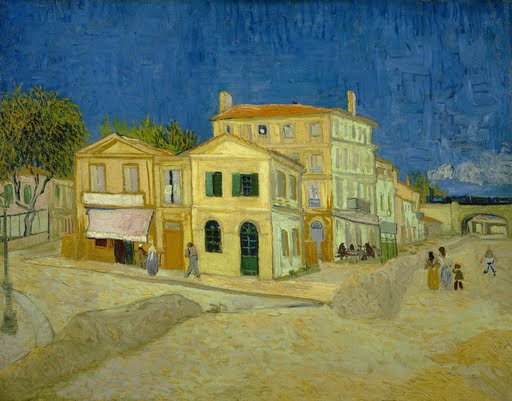 It is the perfect symbiosis of colour and light. All derived from a sparse palette of mainly blue and yellow. I simply can’t get enough of this work. Even though Sunflowers is probably more well-known, The Yellow House is “it” for me. 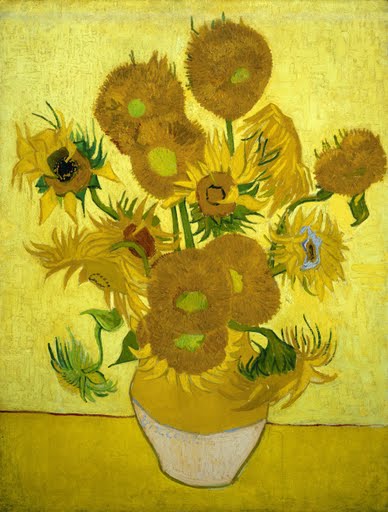 Even Gauguin commented that this is completely Vincent’s style. The blazing sun is redolent in the light of the brickwork of the buildings. None more so than The Yellow House itself. The cobalt blue of the sky dazzles us with its brilliance.

There was a huge gathering around Sunflowers, but hardly anyone noticed The Yellow House. But I did, and I’m glad I did.

Gauguin in the Van Gogh Museum

Gauguin’s Chair is another favourite of mine. 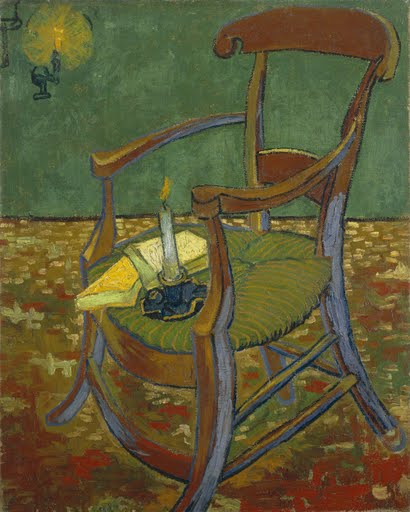 This is executed in the style that perhaps we are all more familiar with associating with Vincent. The crisper outlines, the brightness of the paint giving us more insight into Van Gogh’s psyche. Does the candle on the chair represent Gauguin? A leading light? Or a force intent on burning itself out?

This painting is almost in stark contrast to The Bedroom. 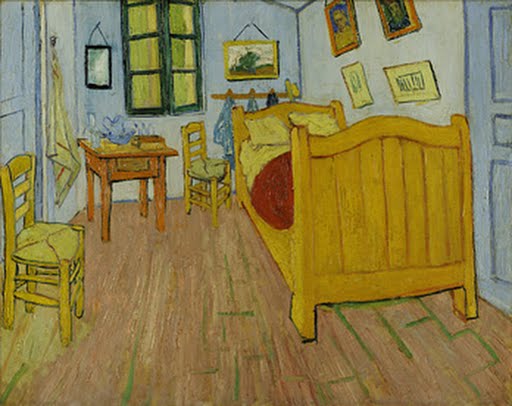 A famous painting. One that is stripped back and bare, functional and stark. It is almost bleak in its depiction of a simple space. Is Gauguin’s Chair more reverential to the subject matter? Is Vincent portraying himself as a simple man, an artisan who associates more with the Potato Eaters? Does he not hold himself in a lower regard than he does his peers?

During his time in Arles, it is evident from the canvases he created that Vincent was heading in a new direction. But for one so sensitive that direction proved to be too much. His association with Gauguin surely didn’t help. Even Gauguin’s portrait of Van Gogh painting sunflowers was met with some dismay by Van Gogh. 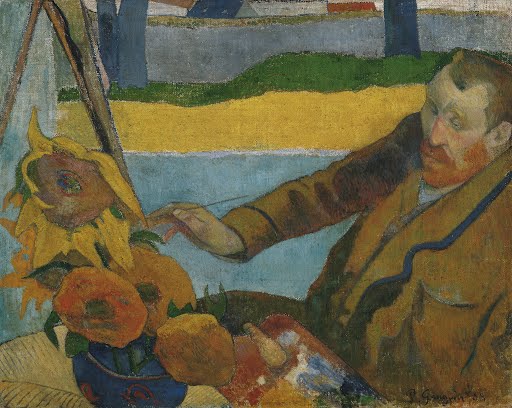 He stated that it resembled him but made him look like a madman. Prescient words indeed. Their turbulent relationship, possibly fuelled by excessive consumption of “the devil’s brew” could not have helped Vincent’s fragile state of mind. Pouring petrol on the proverbial bonfire. After a final, bitter argument, Gauguin moved out of their shared home. All this lead to the unfortunate incident with the ear/ear lobe and Vincent’s readmission to an asylum.

To the sad part now and on to perhaps the greatest. Before his final seventy days in Auvers, Vincent was incarcerated in the asylum at St. Remy de Provence. Although his mental state had improved, he still deemed himself as being not strong enough to live independently. It is this fragility which undoubtedly laid the path towards some of his most magnificent self-expression.  In Wheatfield with a Reaper we see a more subdued palette. 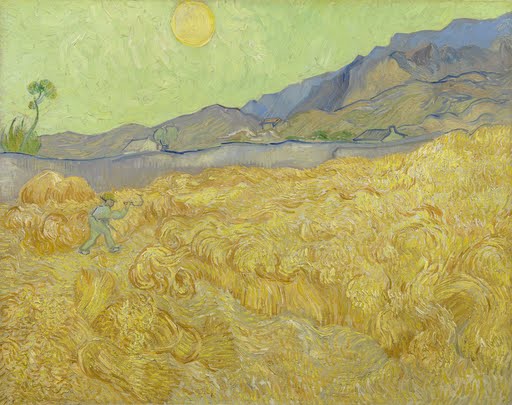 We see a small reaper, bathed in the golden light of a large sun. Is the reaper Vincent? Toiling away, yet somehow insignificant in his own mind? Is this a premonition of his own demise, and in his own words does the wheat represent mankind? Death in broad daylight.

Because for me this is one of his most moving works, an insight into the soul. I observed this with an overwhelming sadness and empathy for Vincent. Painted in his hospital room, a prisoner of that and his own mind. Was he ever aware that he was a genius? I doubt it. That is the greatest tragedy and yet it is his greatest legacy.

Under the watchful eye of Dr. Gachet, Auvers-sur-Oise is where Vincent spent the last days of his life. It is these last days that produced some of his most powerful work. Although in some disparate quarters “Crows in the Wheatfields” (or Wheatfield with Crows) is heralded as a premonition of his own death, it is essentially a sublimely uplifting and positive work.

Therefore, personally speaking, this is the masterpiece of his entire oeuvre. It is dark and brooding, but so intensely powerful. I waited for the customary crowds to diminish and marvelled long and hard at this work. During what can only be described as not the best circumstances (for personal reasons) for viewing, this was the highlight of my trip.  Because I could feel the tension in his brushwork, the heat of the sun, the ominous crows. Even Vincent felt that canvases like this allowed him to express what he couldn’t with words. Standing reverently before it, I got the message. A true testament to the artist’s consummate skill.

In conclusion then, the Van Gogh Museum certainly didn’t disappoint. Not only were there many Van Gogh works, there are works by Gauguin to delight the senses. Most of all there are also works by some of Van Gogh’s peers and contemporaries too.

Don’t miss it, because I nearly did!